It was a foggy and cold morning after our AGM when 20+ keen souls boarded the bus at 8.50am to set off on the Historic Pub crawl. 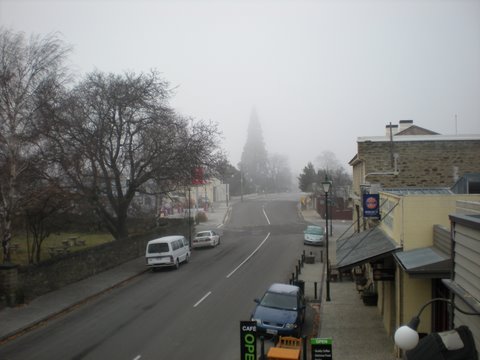 Dunstan House was our first destination as the original Hotel in Clyde back in 1863. This old Hotel is a beautiful example of good restoration which was actually started by our very own patron Fleur Sullivan back in 1968 (one of the rooms is named after Fleur). Thanks very much to Margaret for opening up the premises (usually closed for the winter) and letting us have a peek down the cellar and walk out onto the balcony, the fog just added to the ‘mood of the olden days…’ 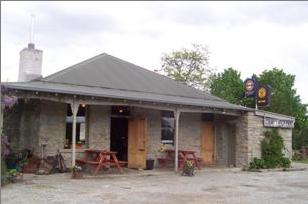 Second stop was at the Chatto Creek Tavern where Lesley treated us to fresh baked scones and Tea/Coffee as she entertained us with the history of the Hotel and relic’s displayed therein. Of particular interest was the story of the original proprietors wife who had to keep getting married after successive husbands died (i.e. ‘falling’ on a pitchfork…) because women were unable to hold a licence by themselves. 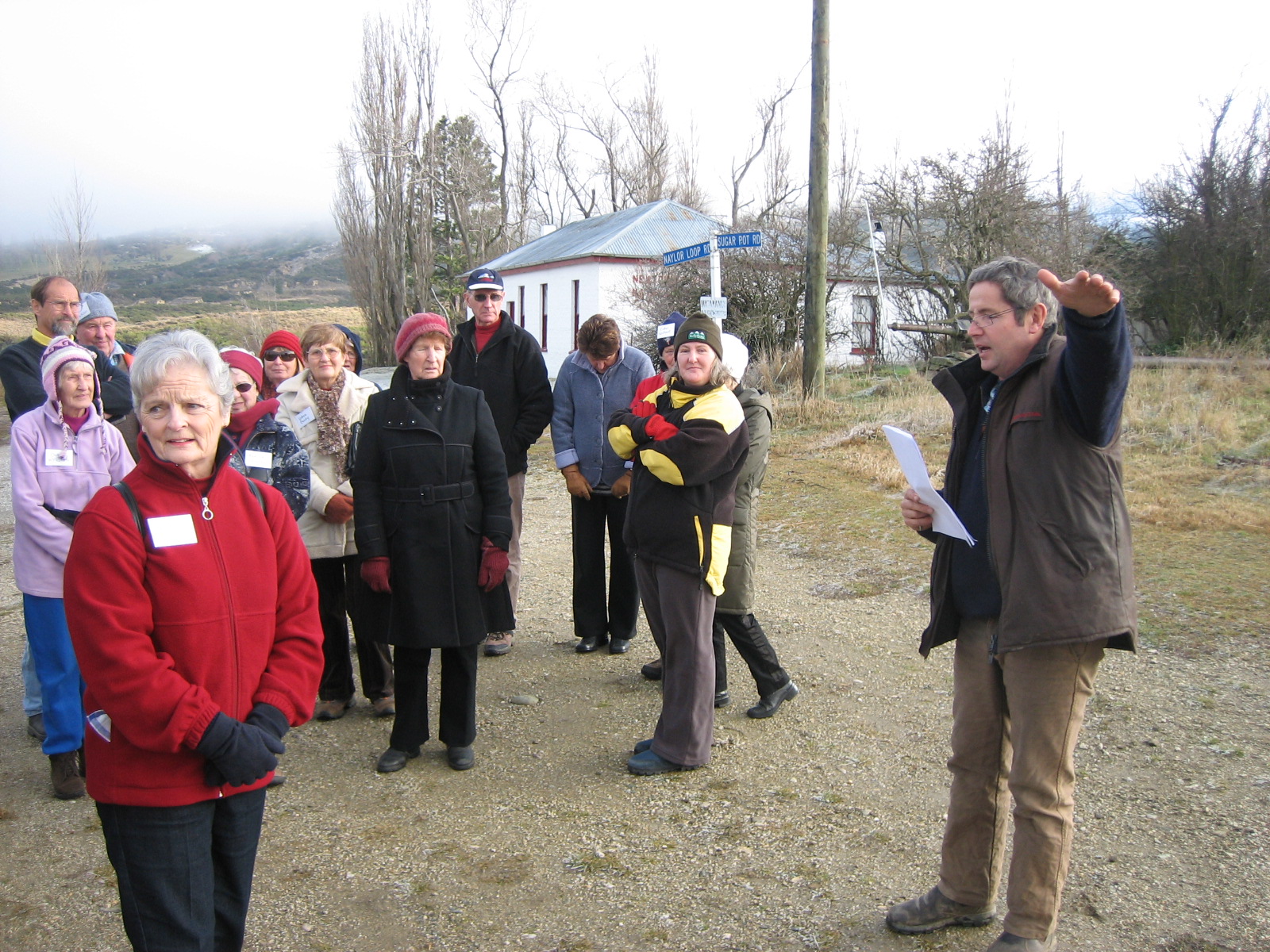 Then we popped out to Matakanui, rarely visited but a wealth of gold mining history and some wonderful old buildings remain in Matakanui. Thanks very much to Ross Naylor for coming out of the warmth of his home and talking to us in depth about the area’s history. 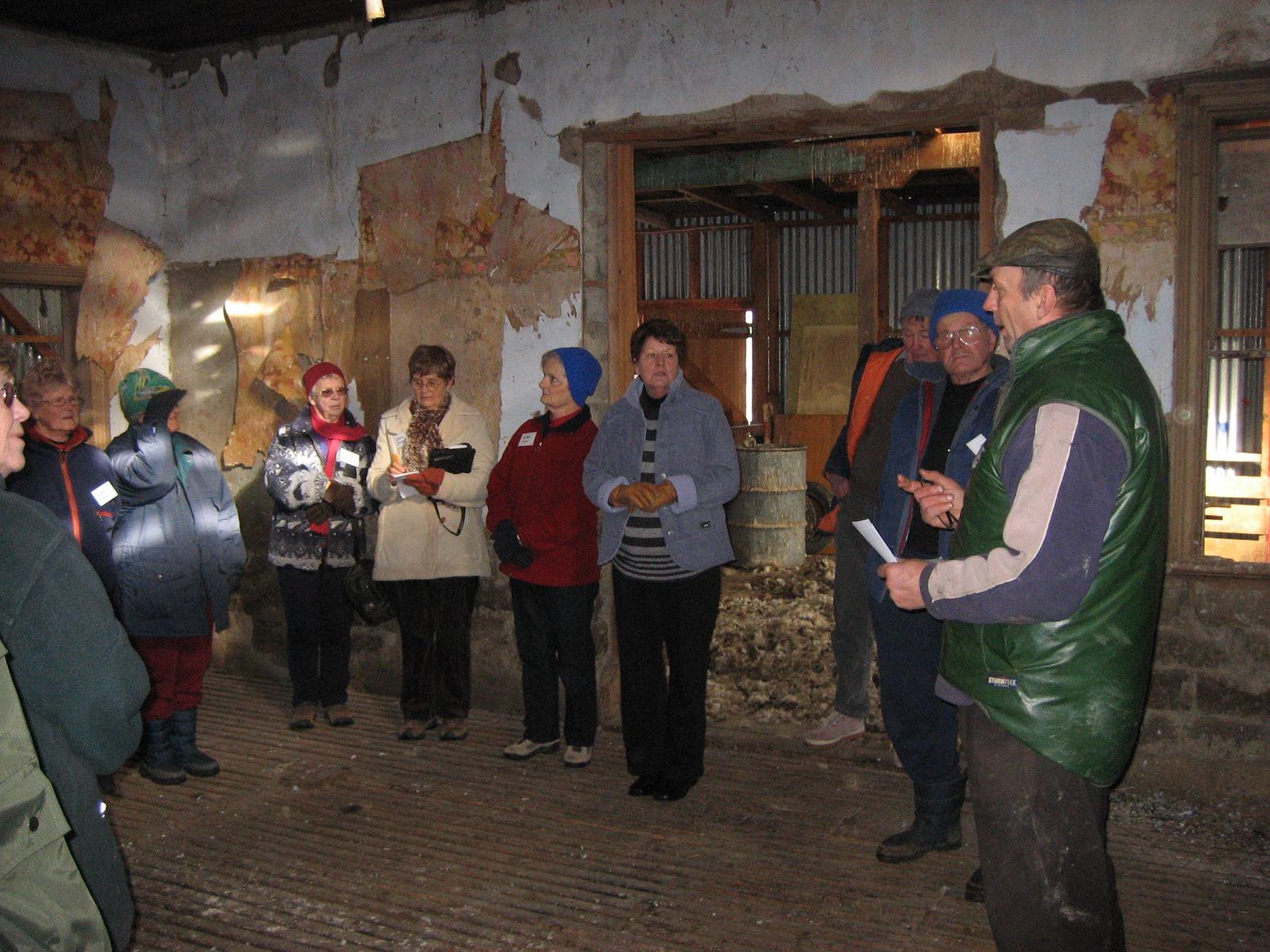 And just down the road is the ‘Matakanui Welcome’, otherwise known as the old ‘Bry Bread’ Hotel. This was a fascinating example of a Hotel that was renovated into a woolshed! Luckily Tony Glassford’s family bought the place and have been keeping the sheep out but with a lot of damage already done this place may not be around as long as other historic places so we are feeling very fortunate to have had the opportunity to see it. 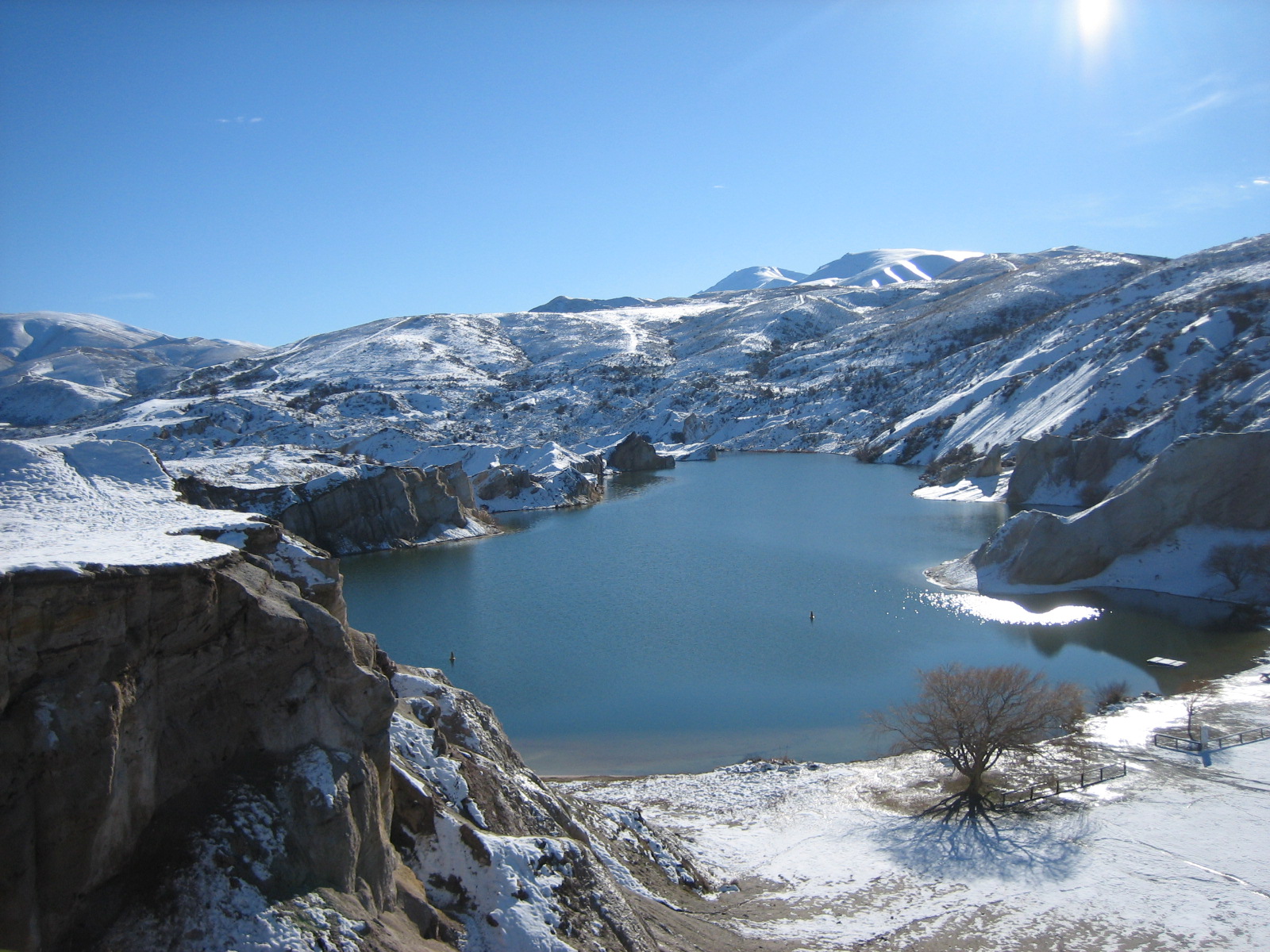 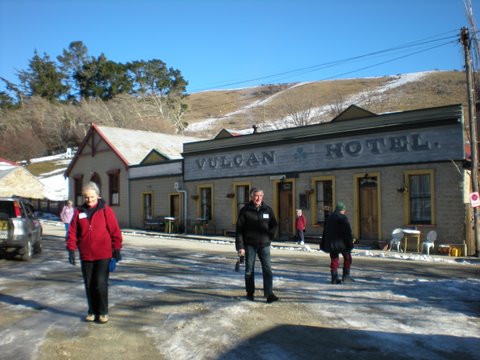 We then did a quick drive-by of Cambrians and nearly got the bus stuck turning around in this ‘quaint’ collection of houses before pulling up outside the Vulcan Hotel for lunch. Mike and Jude put on a beautiful vegetable soup with garlic bread for lunch and we had time to go for a wee walk to view the lake – as you can see we had exited the fog at this point and the views were quite stunning. 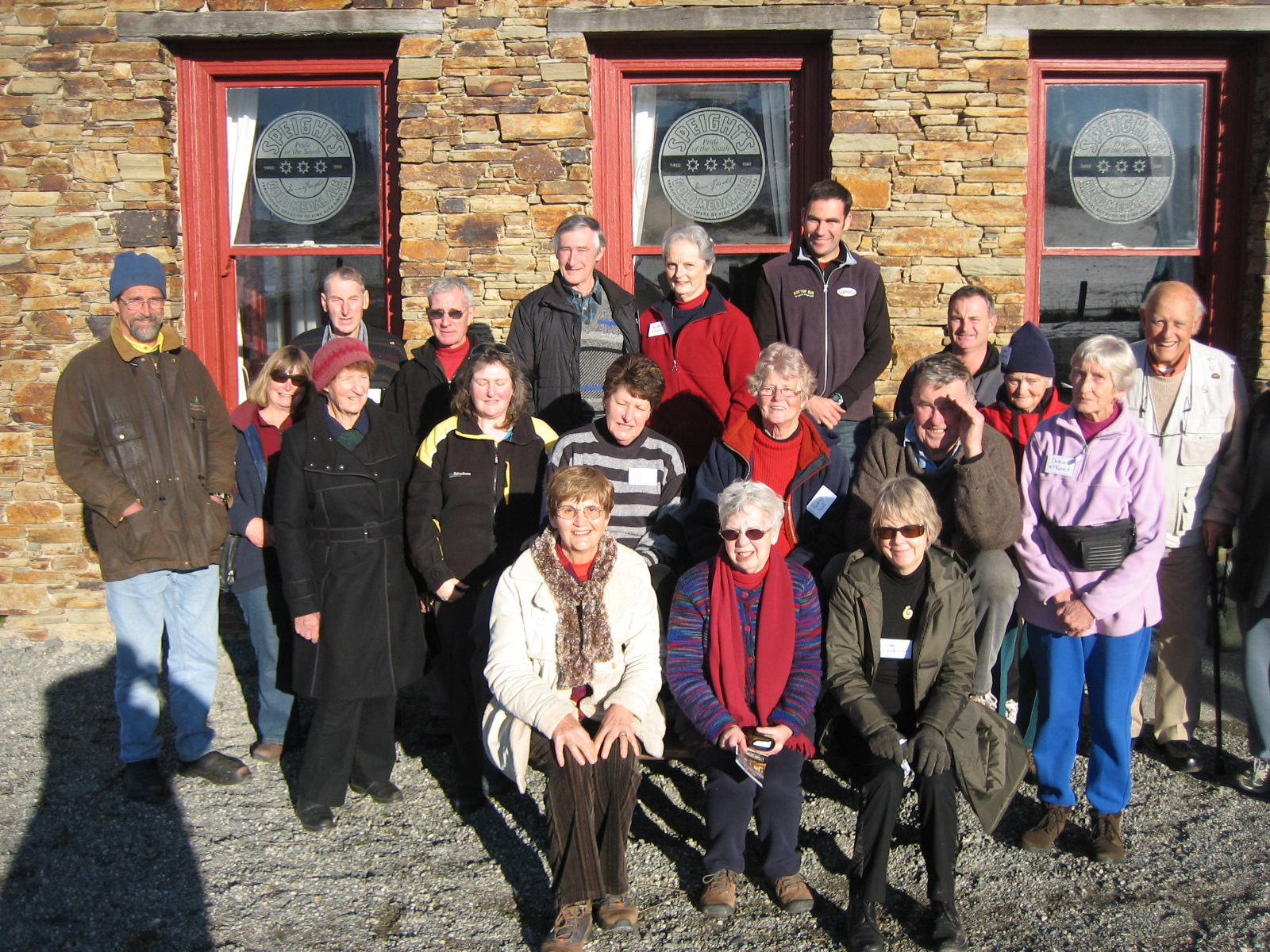 After St. Bathans it was a 30min drive to Wedderburn where the new proprietors were good enough to show us around and tell us about the history of the place. The wonderful rock front on the Hotel you see in the picture was added in the late 1990’s. 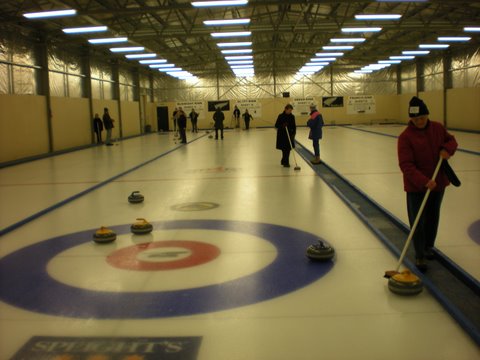 Naseby was our final destination for the first day. We arrived in plenty of time for a quick nap before the evenings activities of curling followed by a very satisfying roast dinner. 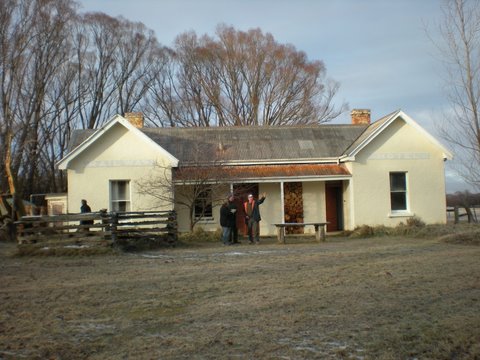 Sunday started with the ‘full cooked breakfast’ at the Ancient Briton Hotel. Then still under beautiful blue sky’s we drove back over the hill to the Ida Valley and down to the Ida Valley Station Hotel. We were very fortunate to have the keys to this privately owned residence mailed to us and as well as some history researched by Martin, Richard Skinner (honorary life member) was able to recal a few stories from his younger years working on the railway lines. 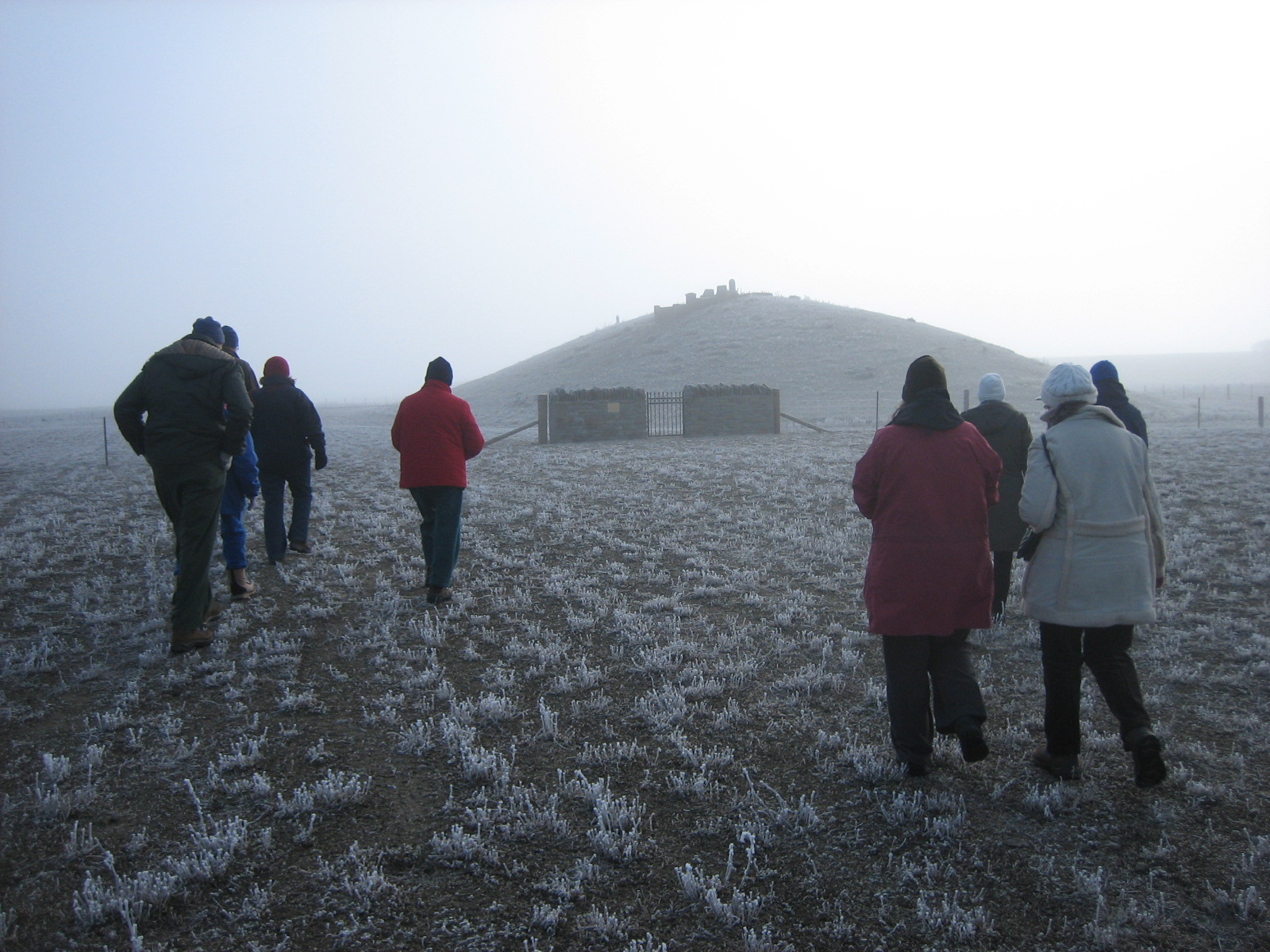 Our final stop of interest for the weekend was Moa Creek where we had the added bonus of a guided tour of the newly restored Moa Creek Cemetary. This cemetary had been lying in an increasing state of disrepair for several decades until January this year when a descendent of some of the Cemetaries  residents decided it was time to do something. Restorations have been done (and more planned) to the remaining headstones and a stone wall entrance way has been constructed. If anybody knows any of the history of the Moa Creek Cemetary Jeff Sawers 03 4487923 would be very keen to hear from you.

Then it was back across the paddock to the Moa Creek Tavern where Sue had some wonderful fresh-baked scones and tea/coffee for us in front of a roaring open fire – an appropriate end to a winter weekend exploring historic hospitality!