A great weekend was had by a hardy few who embraced winter in Lawrence for our AGM and Field Weekend.

Comments were made about why such a programme was proposed for such an inhospitable time of year and though such excuses as ‘necessity’ and ‘waiting for the auditors to get finished with the accounts…’ were muted the real reason was that Terry just wanted you all to appreciate what the miners had to put up with!

Having said that we were very lucky with the weather and we didn’t have to sit in a drafty old calico tent for the duration of the meeting with only Dampa and boiled mutton for lunch.

No! The Lawrence Golf Club rooms were perfectly suited for our purposes and some kind soul had turned the heaters on well before we arrived. The lovely ladies of St. Patricks Women’s Fellowship supplied us with a sumptuous morning tea and the AGM went smoothly with all current committee members being re-elected plus the addition of Steve Clark from Bannockburn. For full minutes of the AGM please click here. 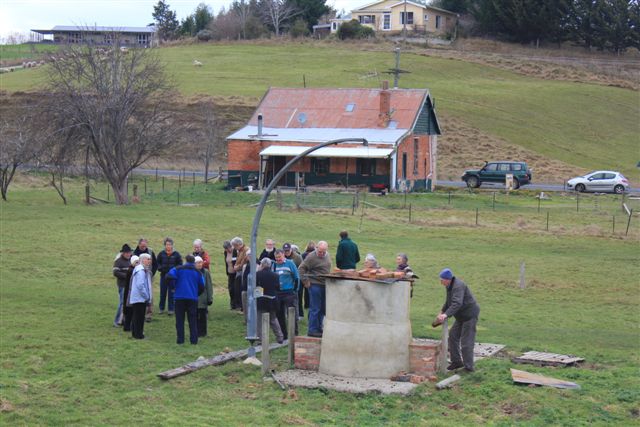 The AGM was immediately followed by a hearty lunch thanks to the same ladies mentioned above then Jim Ng gave us a talk and slide presentation about the old China Town of  Lawrence. Jim is a great speaker delivering well researched facts with his own theories and views on how things ‘probably were’. 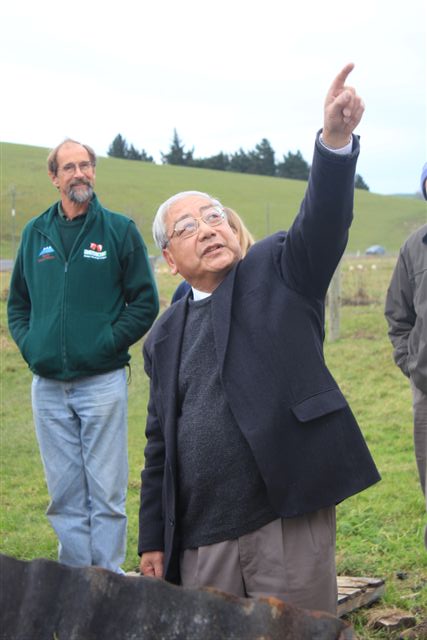 We then went down to the site of the old Chinese settlement and had a look around – apart from the two very well preserved buildings you could clearly make out where the main street used to be and some house sections adjacent to it.

From here we drove in convoy to Gabriel’s Gully to meet up with Ernie McCraw – local historian and recently published author about Gabriel Reid. 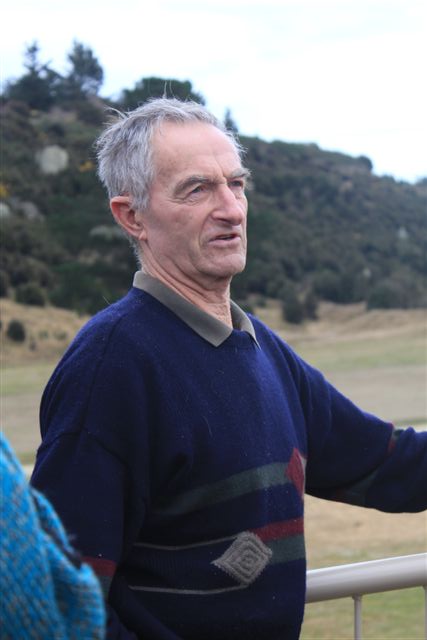 Earnie took us on a very interesting walk around the recently up-graded DOC track that circumnavigates the ‘head’ of Gabriel’s Gully. Old explosives magazines, slag channels, water races, batteries, mines and shafts were all re-discovered as the day got progressively warmer and brighter! (Completely opposite to what the weather-man predicted.) 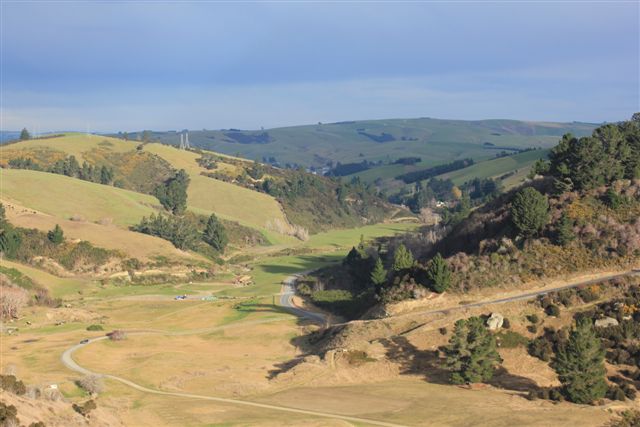 From Gabriel’s Gully we took a short detour up to the final site (it had two previous ones) of Blue Spur township for a bit of ‘heritage prospecting’.

While all this was going on a small sub group of slightly less energetic members were given a tour of the local ‘Tuapeka Vintage Club’ and then onto the Lawrence Museum – apparently all very well received.

After, just long enough to make ourselves presentable for dinner, we converged again upon the  golf club rooms for a truly memorable dining experience thanks to the good folk at ‘The Wild Walnut’ cafe (and catering).  The wonderfully accommodating hospitality of all those we came in contact with in Lawrence (including our accommodation providers) was without reproach. 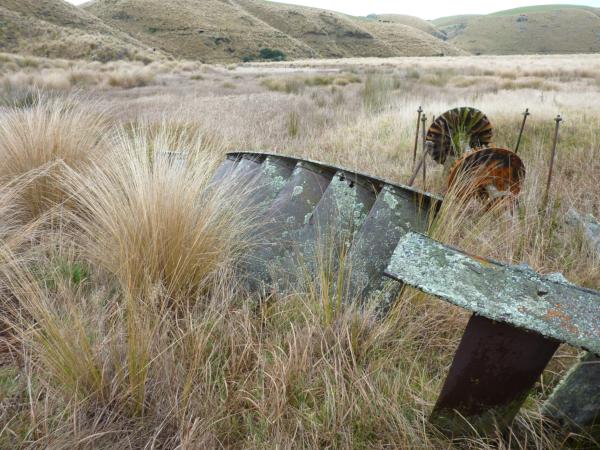 Sunday morning dawned bright and calm again snubbing the weather mans dire predictions. After a generous breakfast for all at the Campground we filled up cars and drove to the Canton Battery near Lake Mahinerangi to meet Dave Still for our morning’s entertainments. And how entertaining it was!! When Dave pointed out to Terry over the phone that folk would get their trousers wet walking through the tussocks Terry imagined the bottom of one’s trousers just above the top of your hiking boots –but no! These were ‘un browsed’ tussocks in the Otago Provincial Quartz Mining Co scenic reserve and not only would have your trousers got wet but all of your shirt and possibly your hat too!! 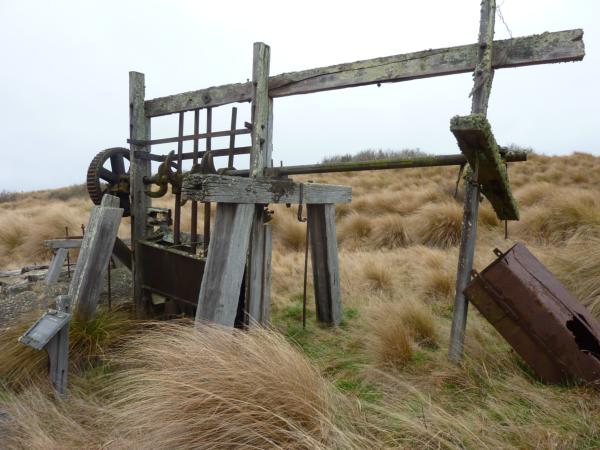 Very fortunately for us the tussocks were dry but there were still many wet obstacles to be negotiated before we got to our destination at an old water wheel slowly sinking into the bog. As most of us waded back through the snow tussock we were met with good hearted banter from another group who took the seemingly ‘easier’ option of skirting around an old water race where they could look down on our position. On returning to our vehicles they tried to assert that they, in fact, had the more perilous of the route options because they also had Prickly Spaniards to contend with (oh, and after 100years or so apparently parts of the water race had eroded away making for very steep traversing).

After a  look at the ‘slowly falling over’ Canton Battery we made our way back up the road pausing a couple of times to look at features in gullies that Dave could relate to his excellent volumes of old photos on the area. 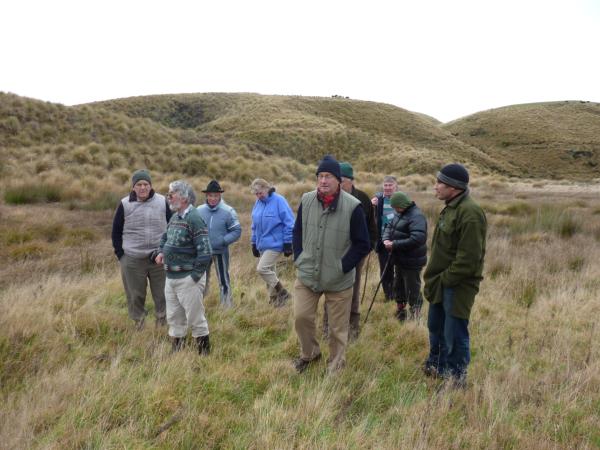 The morning came to a ‘sooner than expected’ conclusion due to the onset of foul weather threatening. We did have time for a look around the old Waipori cemetery (our first recorded casualty at Gallipoli came from Waipori) and huddled behind vehicles for lunch, to peruse the photo albums and to add our collective bits of knowledge to Dave’s database on the families who lived in the Waipori area. 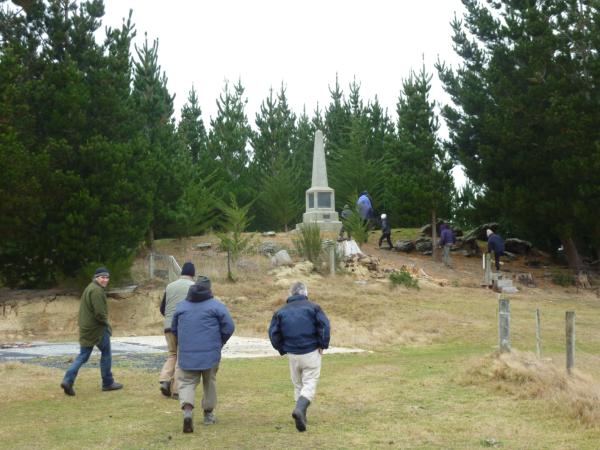 Thanks very much to our generous guides  Jim Ng,  Ernie McCraw and Dave Still. Thanks also to the many folk of Lawrence who made us very welcome and thanks to the members who came along.

Cavalcade and Events (like AGM’s and field weekends) coordinator.