Thanks very much to the Department of Conservation for the land and labour help. Thanks to OGHT member Rex Johnson for the text for the panels – we now have some goldfields heritage interpretation up at our new display. (Located 100m before the current Galloway road bridge over the Manuherikia river.) See below for the full text we couldn’t fit on the panels. 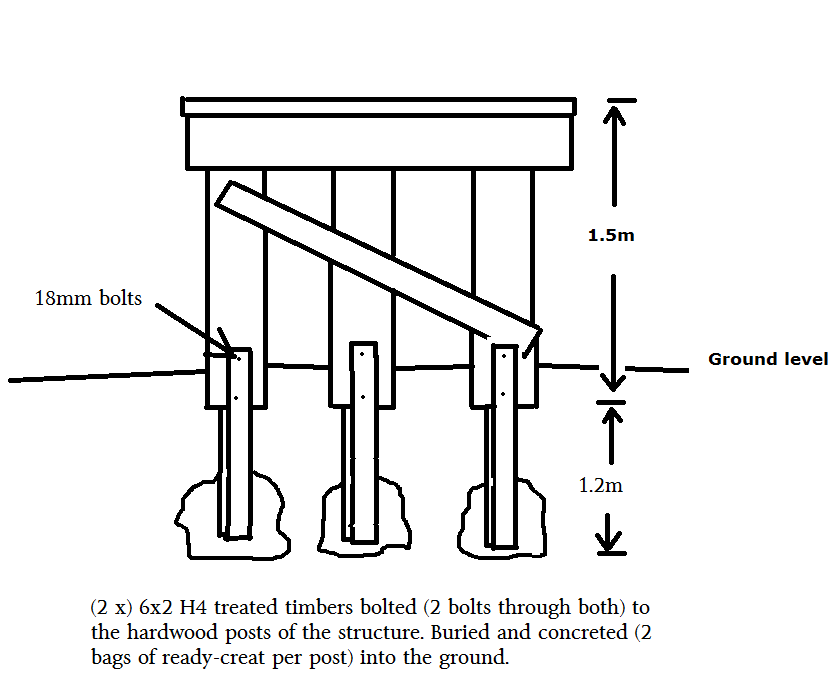 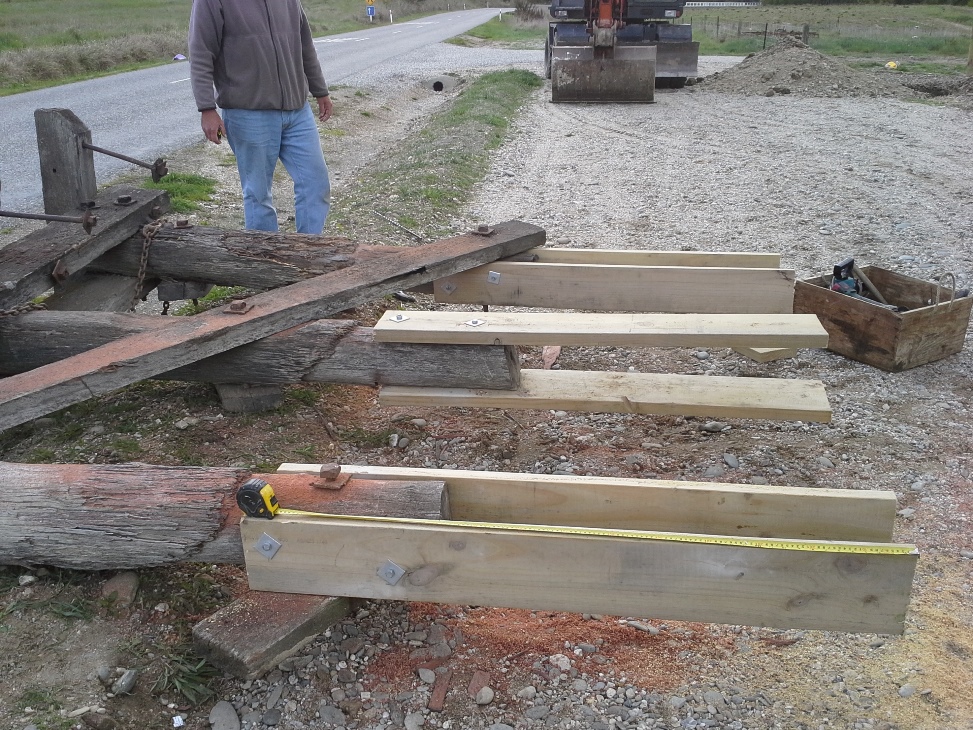 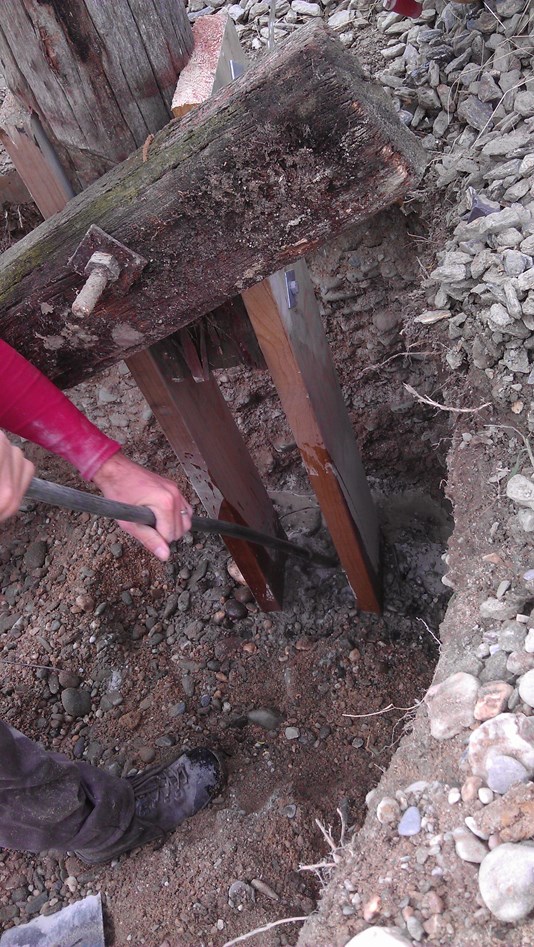 Dredge Buckets
The chain of dredge buckets on display is typical of dredges that worked in this area. The
buckets were removed from the river bank nearby and were probably placed there for
erosion control, rather than being remnants of any sunken dredge. The worn leading
edges of the buckets indicate they saw good service. ‘Ripper’ teeth were commonly
inserted in bucket chains to break up the river bottom and dislodge large boulders.

The ‘Boom’ Times
The fabulous gold returns made by Hartley and Riley in the Clutha River below Cromwell
in the winter of 1862 triggered the gold rush to the Dunstan Goldfields. Eventually the
more-easily won alluvial gold was cleaned out and miners moved to other fields to try their
luck. However, there was still interest in seeking out gold from the river bottoms.
In March 1896 there were 35 gold dredging companies in New Zealand. But it was also the
month when the Electric Company got its first big return in the Kawarau river near
Cromwell.

there were 171 dredging companies registered in Otago alone. Of these, 14 companies
gained licences to dredge the Manuherikia River between the present-day Otago Rail Trail
bridges at Alexandra and Chatto Creek.

How Fast Did a Dredge Move?

Dredges moved by pulling themselves back and forth across a dredge claim, initially using
chains but later commonly by using sturdy wire ropes. Normally four ropes would extend
from each corner of a dredge, all under the central control of one dredge operator.
Dredging movement was ponderous and slow.
However, on a deep river such as the Clutha a dredge could be shifted relatively quickly
from one location to another. A ‘chainman’ would build a series of secure anchor point
along the riverbank and attach a chain around the one required. The dredge’s wire rope
would be attached to the chain and it would adjust its winch ropes to manoeuvre itself
along the river.
On the shallow Manuherikia River a dredge commonly worked in a dredge pond. To move
itself the same winching process was used but the dredge had to dig a dredge pond ahead
of itself to stay afloat. A decision to cross the river might take many weeks to implement
and a movement of this sort was called ‘making a cut’. The Galtee More was reported to
have worked a narrow cut across to … the Galloway side of her claim, leaving her
Springvale side untried. (Otago Witness, 12 May 1902)

Was Dredging Profitable?
In 1900 the big money-earners were share brokers in Dunedin’s three stock exchanges. A
broker earned 2 .5% of the value of a gold dredging company for setting it up. The gold
dredging companies generally had less spectacular returns than did the brokers. “Of the
peak number of 159 Otago gold-dredging companies publicly listed in 1900, only sixteen
were able to pay any dividends; …”
“The extent of the (gold dredging boom) collapse was now becoming obvious. By January
1902, 104 gold-dredging companies had failed and many others were teetering on the
brink. The local newspaper described them as being in ‘every stage of inaction, atrophy,
paralysis and catalepsy’. “

“The few dredging companies that survived were characterised by stability, sound
management and sustainable returns of gold. Ironically, 1902 was the year of peak
production. Dredging companies won 3,309kg (106,389 ounces) of gold, valued at over
400,000 pounds, and disbursed around 146,000 pounds in dividends. Yet a further 72
companies collapsed that year. It was the top few that were winning all the gold.”

One such failure was that of the nearby Springvale Gold Dredging Company which went
into liquidation in July 1900 after only 14 weeks of dredge operation. Their dredge made a
return of 3 ounces of gold a week – a total of 41 ounces.

The Diggers Arrive
Galloway Sheep Station was established in 1858 – imagine it as a remote and quiet farming
operation where the nearest neighbours would be a long hike distant.
James Beattie was shepherding at Galloway on the Manuherikia River in 1862 when payable
gold was discovered in the nearby Clutha River. 55 years later Beattie reminisced about the
rush that followed:
“On Saturday we enjoyed our usual sylvan quietness on that remote sheep-run. On the
Sabbath morning, a clear frosty morning in August, we could see the diggers coming … in
one long continuous stream, all heading for the Clutha River … they reminded me of the
gipsies in the Old Land. Some came with packhorses, some with bullocks, some even utilised
dogs as carriers, while many carried all their belongings on their shoulders in ‘swags’. “

Duncan Robertson owned the Balmoral Hotel which was at a ford across the Manuherikia
River below the adjacent Lower Galloway bridge. ‘Duncan Robertson’s Ford’ was a principal
crossing point for:
• traffic coming down the Manuherikia valley via the Galloway Flat;
• travellers journeying from the coast over the Dunstan Road and Crawford Hills (which
are visible across the river to the left); and
• supplies from Teviot (Roxburgh) arriving via the old wagon road over the Knobby
Range (visible across the river to the right).
As well as a ford for horses and wagons, Robertson used his boat to provide a ferry service
for foot passengers. Robertson’s hotel was opposite Lion Rock, a large schist outcrop said to
resemble a crouching lion. The hotel was flood damaged in 1866 and was swept away by a
great flood in 1878.
Permanent Manuherikia bridges were eventually established to ease travellers river-crossing
woes, including Alexandra’s Shaky Bridge (1879) for light traffic, Ophir’s Daniel O’Connell
Bridge (1880) and the Otago Central Railway ‘Manuherikia No.3’ road-rail bridge at Alexandra
(1906). The nearby Lower Galloway bridge was opened in 1922 and was modernised in 1958.
Pamphlet – OGHT Walking Tours1